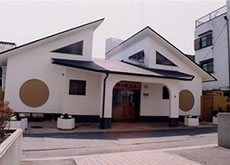 Tradition says that it was founded in the year of Edo, called Ue-no-Tanoyu, Kawa-no-Yu or Noda-no-Yu. It was loved so much by the villagers that they came everyday to recover themselves from the fatigue of their daily work by walking through a path between rice paddies (Aze); so-called “Azenashi-no-Yu”. Later they started to call it “Tanoyu Onsen”. “As God exists in the rice paddy they say, the name of Tanoyu sounds suitable ・・・. With the intimate plain surroundings you will enjoy the real hot springs to the full.” You can read the primitive flavor of Tanoyu in the above poem.